The Salem Freshman Football team concluded their season tonight with a 35-12 win over the Hartland Eagles to push their final record to 8-1 for the 2014 season.

Head Coach Ricky Styes (also a social studies teacher at Salem High School), had this to say about tonight’s win:  “It was great to see the team rebound from last week’s setback.  The team came out and played very physical from the opening kick off.  We had big plays on defense, and our offense was able to score on our first 4 drives.  We coaches were very proud to see our kids play this well at the end of the season.  We have coachable kids that are determined to win.”

And his thoughts on the season: “We certainly had a special group of kids that did some very special things on the football team.   We had kids that genuinely liked and played for each other.   Our success on the field can be attributed to their togetherness.  They had fun playing this football, both in games and at practice.  Our starters played football games not only to win, but they were dead set on giving our back up players the opportunity to get into games.  That is a special thing.  We coaches feel that this cam be a very special group of kids in the years to come.”

Starting quarterback and a team captain, Ryan Young, offered insight after finishing his first year as a ROCK: “What a season we had. From the hours of watching film, all of the down ups to team camp at Adrian College, we put in the work and success came as a result. We worked hard for each other – for our coaches, our brothers, our school; our entire football family. Going 8-1 comes with one loss, but it’s not a defeat. We watched film, saw what we did wrong and came back the next week to prove who we really were. It’s been an honor to play this year. I love everyone that’s apart of the Salem football organization and cannot wait for the next three years.” 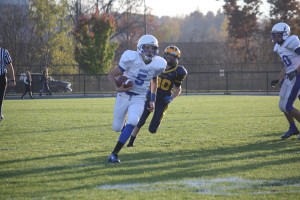 Young headed for a 1st down