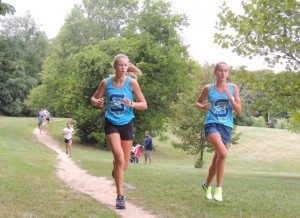 This year’s student athlete spotlights will begin with everyone’s favorite four-sport athlete, Madalyn Simko! Madalyn is currently in the middle of her final season as a Salem Cross Country runner. So far, the Rocks are having a great season as a team by placing highly in all of their invites and winning all of their dual meets. Their biggest victory at this point has been winning the Rambling Rock Invitational. A personal goal for Madalyn this season is to get back to where she was during sophomore year, after facing a setback during junior year due to an injury. The team’s biggest goal this year is to make it back to States.

Madalyn first started cross country in sixth grade at East Middle School and hasn’t stopped running since. After her time as a Rock is over, she hopes to continue running throughout college, whether it be competitively or for a club team. Before each meet, Madalyn prepares by drinking a lot of water and eating an english muffin with peanut butter. Her pre game ritual wouldn’t be complete without listening to her pump up jams too. She’s looking forward to watching everyone grow as a runner and PR this season. Madalyn’s favorite part of Salem Athletics is the family that it builds because she gets to have fun with the people around her while competing in a sport she loves!