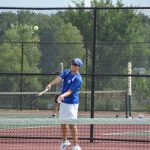 Next up in the Student-Athlete Spotlights is Jack Nugent! Jack is a Salem Senior and is currently finishing up his final season of tennis. He began playing tennis during his sophomore year and has improved a lot over the past three seasons. The Rocks have been having a good season so far, placing well in