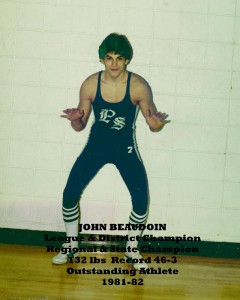 “His achievements spoke for themselves. John never talked about himself. He didn’t have to, he just showed you.” Dave Dameron

“John was part of the program with a long list of accomplishments except for one…an Individual State Champion. John brought that home his Jr. year and then followed that up with an unparalleled Sr. Campaign.  He was grace under pressure while achieving his 2nd individual State Championship.  John set the bar for those that followed and like any other pioneer he opened the door showing what can be done with hard work and a purpose.”Greg Woochuk